The soft-spoken voice of Dr. Vivek Murthy as he speaks on the topic of Loneliness is incredibly compelling. I first heard him speak with Dr. Brené Brown on her podcast Unlocking Us in late April, 2020. Dr. Brown is best known for sharing her research on vulnerability, empathy, and shame. Then later in early July, I listened to Dr. Murthy on the Next Big Idea Podcast with Dr. Susan Cain who wrote the book Quiet, a captivating book on how our society often undervalues introverts. In each of these reflective conversations and in his book Together, The Healing Power of Human Connection in a Sometimes Lonely World Dr. Murthy speaks of the prevalence of loneliness in our society and the adverse effects it has not only on our health but in the connections we have with each other. 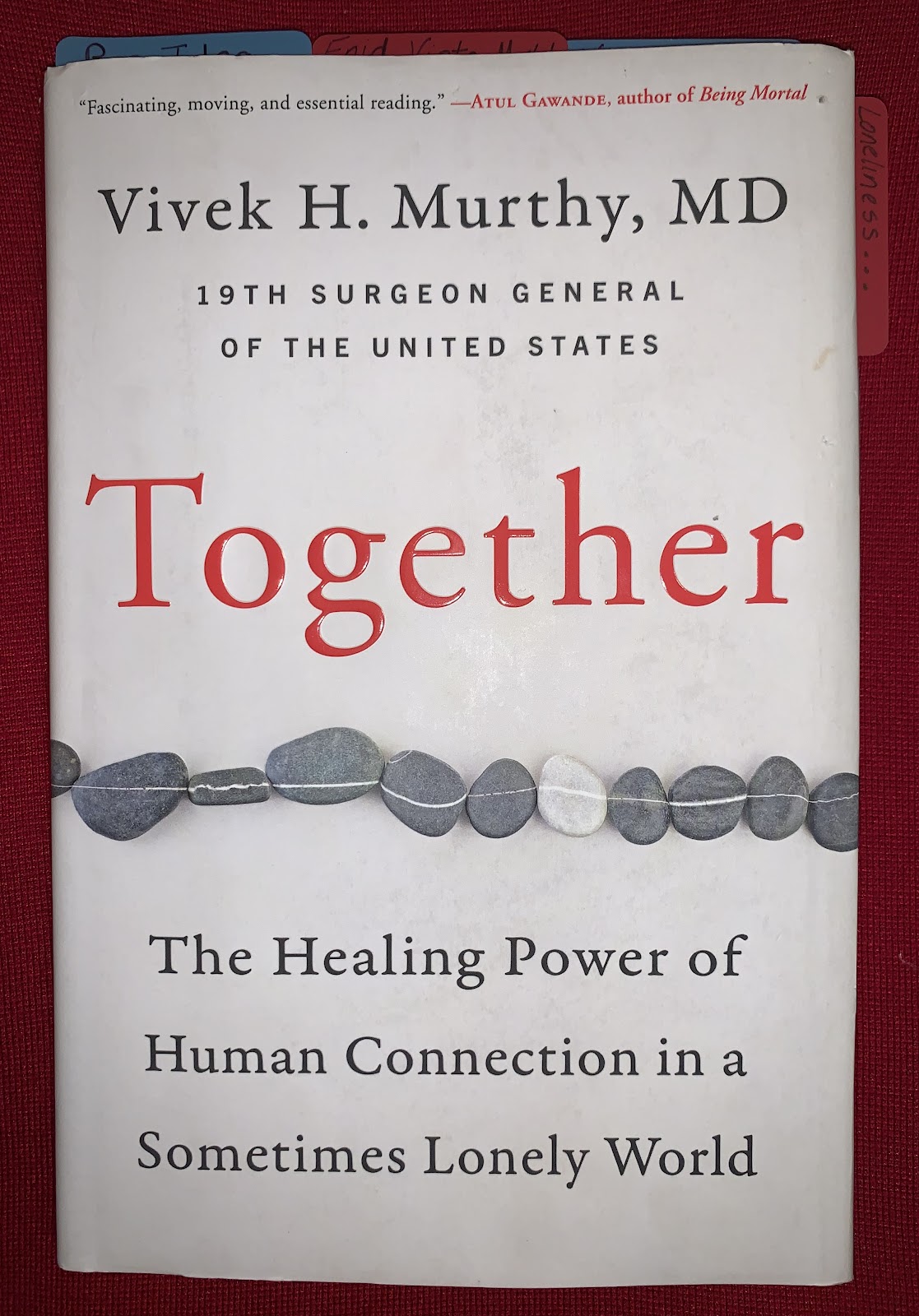 As our nation and the whole world are transitioning into implementing the public health requirements of the COVID19 pandemic, isolation has become a necessity for our own personal safety, the health of our families, closed friends, neighbors, and those that are most susceptible to illness who live in our communities. Starting in late March of 2020 the streets became empty, non-essential businesses closed, personal dwellings became a refuge, and we all watched and literally cheered as only the essential workers traveled back and forth from work to home. The rest of us were all then were forced to experience our own version of isolation, disconnectedness, and yes often loneliness.

Although isolation is not loneliness and Dr. Murthy clarifies the difference. He shares, “Many people think of loneliness as isolation, but the difference between these two terms is substantial! Loneliness is the subjective feeling that you’re lacking the social connections you need. It can feel like being stranded, abandoned, or cut off from the people with whom you belong--even if you’re surrounded by other people. What’s missing when you’re lonely is the feeling of closeness, trust, and the affection of genuine friends, loved ones, and community” (p. 8). The powerful component of the book Together is how Dr. Murthy further defines loneliness through relatable stories of friends, family, patients, and community members.

The stories of Virta and Mychele told by Dr. Murthy are similar to those we might find about people in our own communities who quietly go about their daily lives regularly unnoticed and nearly invisible. Virta becomes lonely after complications from illness and Mychele is a lonely widow after many years of a close-knit marriage. Both of these women wandered through each of their days slowly losing their former lifeline connections. It was not until others reached out to them with love and compassion did they slowly began to reappear out of isolation and start to heal. They both gained a new sense of belonging by regularly connecting with those around them and eventually finding a new purpose by serving others. It did not happen quickly nor without setbacks but they emerged to start living a different way. 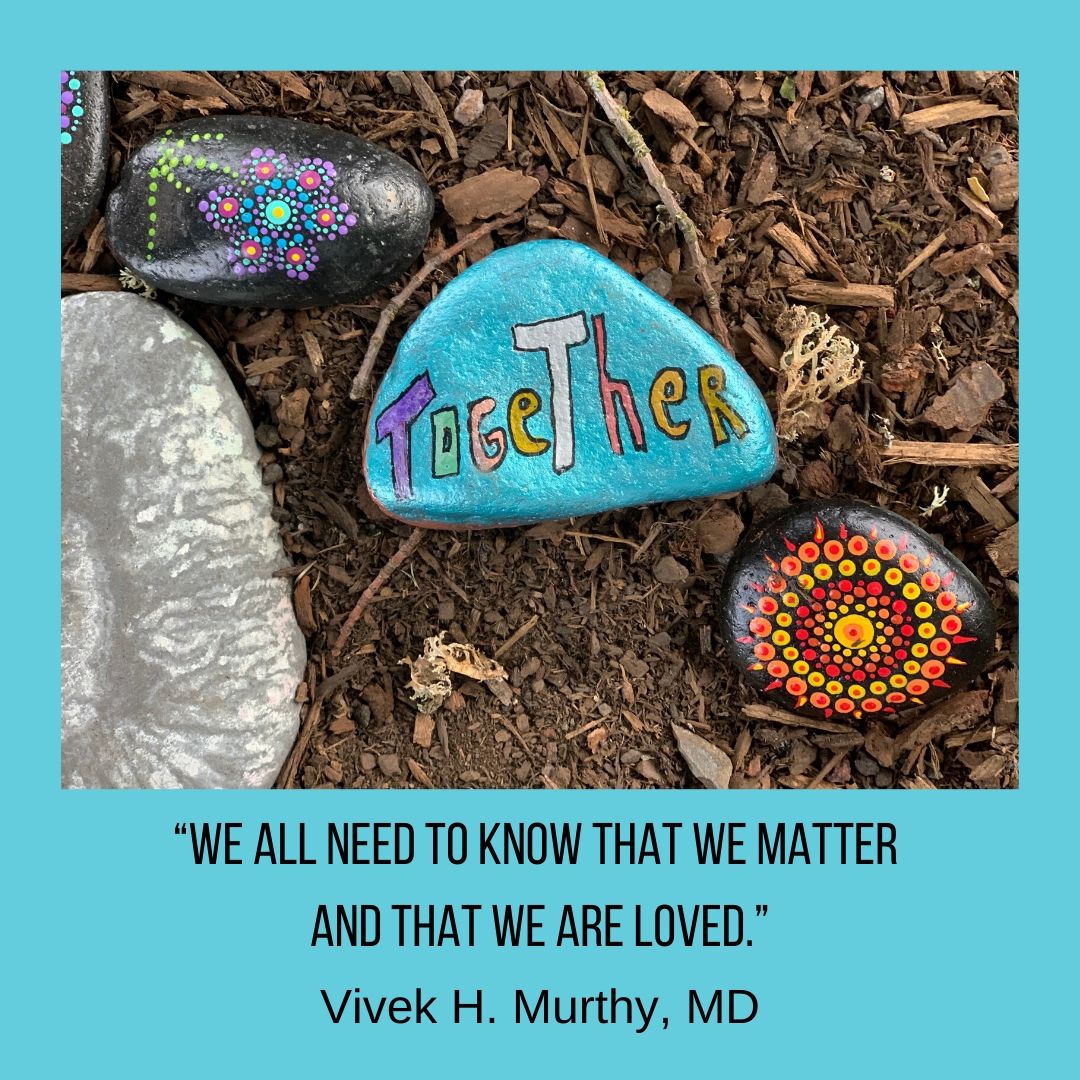 I was extremely touched by Dr. Murthy’s story about his maternal grandfather and his brother Vasana. He explains there are those who experience unimaginable pain when losing someone they are deeply connected to. For most people, the pain subsides over time, but for others, the experience can be life alternating. The story of these two brothers started with their shared life experiences of on-going hardships in their early childhood. Neglected, mistreated, hungry and homeless… “they took care of each other when it seemed that no one else would” (p. 40). This closeness continued into adulthood for these two and when Dr. Murthry’s grandfather died his brother Vasana quickly followed him in death. Although incredibly sad, Dr. Murthy reminds the reader that “While loneliness has the potential to kill, connection has even more potential to heal” (p. 51).

Dr. Murthy shares about the power of healing with Derek’s story. To start the story it is important to note, not only are we in the middle of a world-wide pandemic, the Black Lives Matter social reform movement is gaining momentum and attention across our nation. The hearts and minds of people living in the United States are slowly leaning in towards a much-needed change in our society due to unjust, often brutal, and deadly, outcomes of people of color in our communities.

Derek’s story begins with details of his childhood including how his father was a leader and former Grand Wizard of the Ku Klux Klan. Derek was homeschooled as a child and raised in a tight-knit extended family with their own sense of purpose and culture. With little, if any other life experience and beliefs other than what he was exposed to as a child he headed off to college. A brave task for any young adult heading away from home, but extremely difficult for Derek.

Dr. Murthy describes Derek as an inquisitive individual who wanted to not only connect with others in his new surroundings but wanted to understand and learn more about his college community. Realizing his background would be an area of contention for his new peers he hid this knowledge about his family from them. Eventually discovered he was “outed” publicly. Not only was Derek experiencing loneliness being away from home and family, but he was also now left without friends to support him through his college experience. A new type of deep loneliness emerged for Derek.

For many, this is where the story would end with no connections, no trust, and a lonely college experience. Fortunately for Derek, his story was different. “A few fellow students reached out to connect and have thoughtful conversations with him. Their willingness to listen and share with respect and compassion gradually changed Derek’s belief and help him realized how destructive his original values had been” (p. 68). Over time connections were developed, friendships created, and loneliness was not the outcome for Derek. I am wondering if the same approach today in light of the Black Lives Matter movement could follow this same path.

These are just a few of the stories Dr. Murthy shared on loneliness and the drive we all have as humans to connect even when faced with incredible diversity. During a pandemic, we are forced to stay in isolation, but the importance of continuing to reach out to others through kindness, compassion, and service is critical if we are all going to pull through this together. Hopefully with a renewed sense of the value of “connection in a sometimes lonely world.” The cure for loneliness does not occur in isolation but with the relationships, we purposefully cultivate with others. 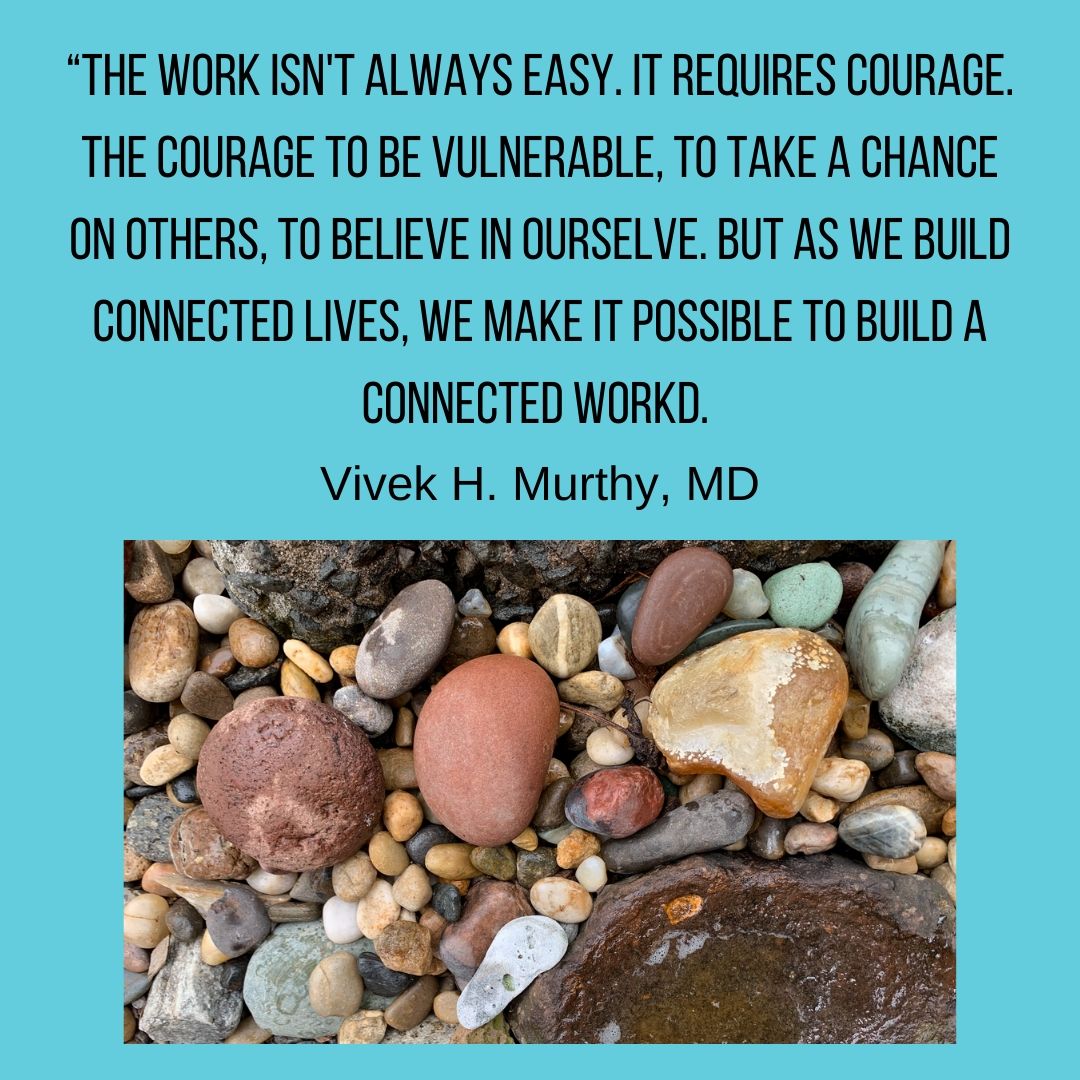