A Duck & An Eagle

Mac Anderson, You Can’t Send a Duck to Eagle School—And Other Simple Truths of Leadership

Mac Anderson’s book, You Can’t Send A Duct to Eagle School was recommended to me by a school leader whose pursuit for equity in education mirrors their daily leadership actions. At first glance, it appears to be a simple text that could be quickly read in one sitting. That was my intent, but after reading “the duck to eagle school” mini-lesson in Anderson’s introduction I realized this first important leadership lesson would be one of many valuable exercises for my personal reflection as a learning leader.

Anderson’s insights are not necessarily written for school leadership, but they certainly can be interpreted that way. Here are the lessons I want to take with me and apply to my own school leadership journey. 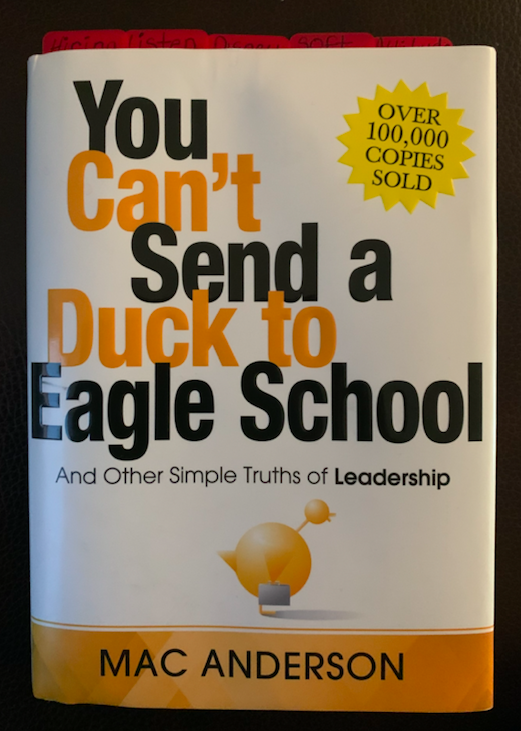 In the last chapter, Anderson provides one of the strongest examples of leadership from the author of The One Minute Manager, Ken Blanchard. Anderson shares the story of visiting Blanchard’s home. At the end of a late evening, Blanchard literally jumps up and excuses himself for at least 20 minutes. Anderson later finds out Blanchard made a late phone call to wish a long-time part-time employee a happy 85th birthday. “Ken saw an opportunity to serve and to thank his people. He doesn’t do it because it’s expected of him; he does it because he truly cares. It comes from his heart, and his people love him for being the servant leader that he is” (p. 119).

A true leader leans forward to be of service to others, not because they get to but because they really want to.
Posted by Kimberly Miles at 5:30:00 AM